Resources / Plan / How To Read Blueprints

The blueprints for your new house have arrived and now you need to decipher them. This is not only for your own understanding, but so you can communicate clearly with the many professionals you will work with throughout construction, including the lending institution that bankrolls the project, the builder, and the subcontractors. Here's help.

What's Included in a Plan Set:

Indicates the type of foundation (usually a full or partial basement, crawlspace, or slab) and all of the specifications necessary for constructing it, including dimensions and locations for footings

Indicates how all of the walls should be constructed, including the size of the lumber to be used — usually 2x4 or 2x6.

One for each level of the house, these indicate the sizes and locations of all of the rooms in the house, all the doors and windows, and any built-in elements, such as plumbing fixtures and cabinets.

Includes the details needed for roof construction, including type, pitch, and framing.

Exterior elevation drawings. Drawings of all four sides of the house's exterior.

Show a cross-section view of a particular section of the house from roof to foundation. A cross-section will indicate details, such as ceiling height, ceiling type (flat or vault, for instance), and window and door dimensions.

Close-up drawings of special details, such as built-in shelving, moldings, and columns.

Show locations of all the outlets, switches, and fixtures. Also indicates which switches operate which lights, and where the electric lines should be run.

Show locations of all the outlets, switches, and fixtures. Also indicates which switches operate which lights, and where the electric lines should be run.

Indicate the locations of all the plumbing fixtures and piping.

How to Interpret a Blueprint for a House

The floor plans (also known as house plans, house blueprints or house blue prints) — and all of the other drawings in a plan set set — are drawn to scale, often one-quarter or one-eighth of an inch, meaning every one-quarter or one-eighth of an inch on the blueprints equals one foot in actual size. The simplest method for translating scale measurements into their actual size is to measure them with a scale ruler, which will indicate the conversion directly on the ruler. (Scale rulers are available at any crafts store and at many drugstores). Alternately, you can figure the conversion in your head. On plans drawn to a one-quarter of an inch scale, for instance, two inches equal eight feet of true space. Each page of the drawings should be labeled to indicate what size scale the architect or home designer used when drafting the plans.

Usually door swings are noted as a short straight line linked to a short curving line (the swing or arc of the door). There might also be pocket doors, which are indicated with a thick wall line intersecting a short thin line across an opening. Kitchen and bathroom sinks, toilets, and some furniture will be shown. Stairways will have arrows and the words "up" or "down" to indicate which part of the stair goes in which direction. For example, House Plan 928-14, shown below, includes door swings, sliding or pocket doors in the pantry, all sinks and toilets, and the stairway with up and down arrows. 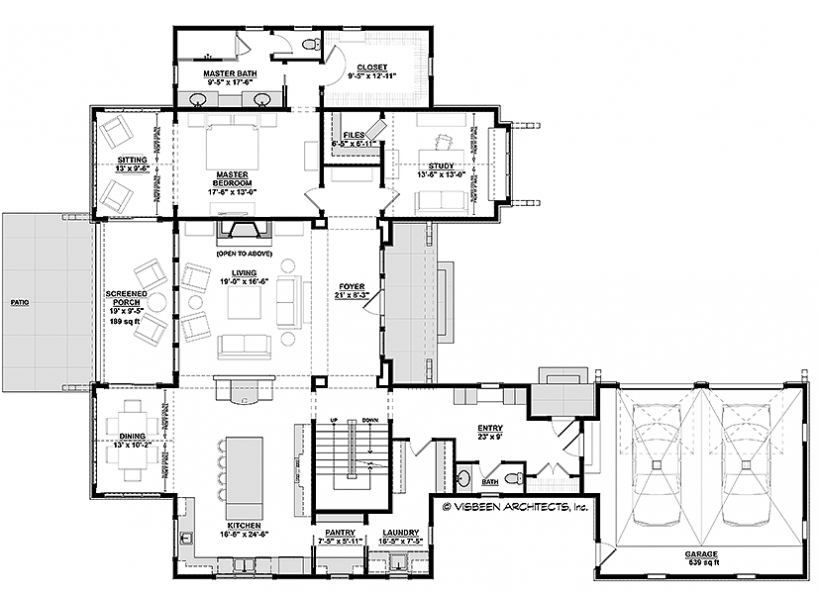 You will probably also notice a number of circles, triangles, or hexagons with numbers inside of them. Placed next to windows and doors — and sometimes next to other elements, such as lighting or plumbing fixtures — these notations correspond to those on the window, door, plumbing, and electrical schedules found at the back of the plan set. These schedules indicate the size and types of the doors and windows to be used, and sometimes even the manufacturer and model numbers, as well.

And finally, while the symbols used in house blueprints are too numerous to mention, you should be familiar with the most standard. Thick, solid lines are used to indicate full-height walls, while thin, solid lines indicate other built-in structures, such as cabinets, bookshelves, or plumbing fixtures. Thin, dotted lines indicate overhead features, such as wall cabinets in a kitchen or a special ceiling treatment or an archway in the living room.

Financing Your Dream Home The house plans package - What Comes in it? What Plan Add-Ons Are Available When You Purchase a House Design from ePlans? How to Read House Blueprints Find the Perfect Home Builder Cost to Build Frequently Asked Questions